The Only Grilled Chicken Recipe You Will Ever Need

As the weather starts to warm up, the patios pop up on the sidewalks as do the BBQ grills in the backyard. My hubby usually takes charge of the grill – there’s something very manly about the whole hype surrounding the outdoor grill. The recipe and the preparation is still in my charge though, and this dish in particular is delicious every time it’s on the menu. Whether it’s just the four of us, a few friends over or a platter for the neighbourhood barbecue, this chicken dish is fool proof and will always be the first to disappear off the table. The ultimate grilled chicken – the only recipe I promise you will EVER need!

I enjoy cooking especially when I’m creating and experimenting with flavours, and this was one of them. Orange, ginger and mustard – a match made in heaven. That’s what this orange grilled chicken recipe is. Heavenly!

Serve this grilled chicken with your favourite coconut rice or naan. 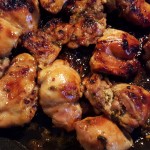