Barley is an awkward food, right? I never know how to “sell” it to my kids. But once I started cooking with it there has been no turning back. If this whole grain is as new to you as it was for me then start with this pot barley recipe. Barley pilaf (or as I call it barley pulao) is cooked simply and then tossed with spices and veggies. Yum!

Slightly chewy and grainy. Like a more robust rice which makes sense because rice is a processed version of brown rice. You can find out more about What’s the deal with Barley here, but here’s a quick snapshot:

Barley is a nutritious whole grain. High in fibre, high in protein it also comes chock-full of micronutrients that help lower cholesterol and inflammation. Ready to include it in your family’s diet?

What Kind Of Barley Should I Buy?

Shopping for barley can feel a little overwhelming especially if you’re new to this whole grain. It is most often found in its pearled form though hulled barley scores the highest in nutrition. This is because it includes the entire, edible grain. In pearl barley, all of the outer husk and bran has been polished off as have 2/3rds of the grain’s nutritional qualities. I often cook with pot barley – the in-between sibling of hulled and pearl. This variety takes about 40 minutes to cook. I do this on the weekend and with a little bit of meal prep, I can include this grain on the menu for those busy nights.

I’ve made Barley Pulao a number of times at home. It’s kid-friendly, naturally gluten-free, vegan, dairy-free and full of warmth and flavour. Pulao is normally a rice-based dish that’s originated in northern India. It is onions and veggies and whole spices cooked with rice. This is my version of the dish. I’ve used pot barley instead of rice and tweaked the process a little bit to make it easier to incorporate a whole grain like barley. Enjoy! 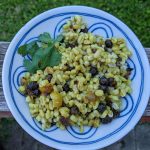