Memories of Diwali & Inviting the Light

Hello! I am excited to introduce you to Radhika. She’s an aspiring writer and digital marketing consultant. She’s often behind-the-scenes on Maple and Marigold and Nourish by Numbers. After much pleading, Radhika has finally agreed to share with all of us, a peek into her life growing up in India. I’m particularly grateful because it is her memories and experiences around Diwali. Enjoy!

Diwali as a festival is many things to many people. In a country of a billion individuals, multiple languages and numerous customs, there are myriad versions of Diwali. Some people celebrate Diwali to mark the triumphant homecoming of Lord Ram after defeating Ravana. Others celebrate Diwali to welcome Goddess Lakshmi into their homes. For the business community in India, Diwali is the start of the new year – the equivalent of the harvest for the farmer, so to speak. To me, Diwali will always be the Festival of Lights. It’s the lighting of diyas – rows upon rows of handmade clay bowls with mustard oil and cotton wicks. These tiny lamps, with their tentative, flickering flames light up the darkest of nights. They seem ever more luminescent, perhaps because of the contrast provided by the dark. Or at least that’s the way I remember them

I spent a good part of my childhood in a joint family household with paternal grandparents. My grandmother was a devout matriarch who had countless little rituals around every Hindu festival. As a child, some of these rituals baffled me and others just brought out my worst rebellious instincts. But in the days approaching Diwali, even I had to put my skeptic hat aside and allow myself to be caught up in the wonder of Diwali.

To be fair, as a child I had no major part to play in the lead-up to Diwali except taste all the laboriously handmade goodies. My sister and I would get new dresses a few days before Diwali and our grand contribution to the festivities was to wear these new clothes and try not to get them dirty. My grandmother and mom would do all the heavy lifting with the cleaning, cooking and preparations for the puja. They started cleaning many weeks in advance and I tried my best to stay out of the way. 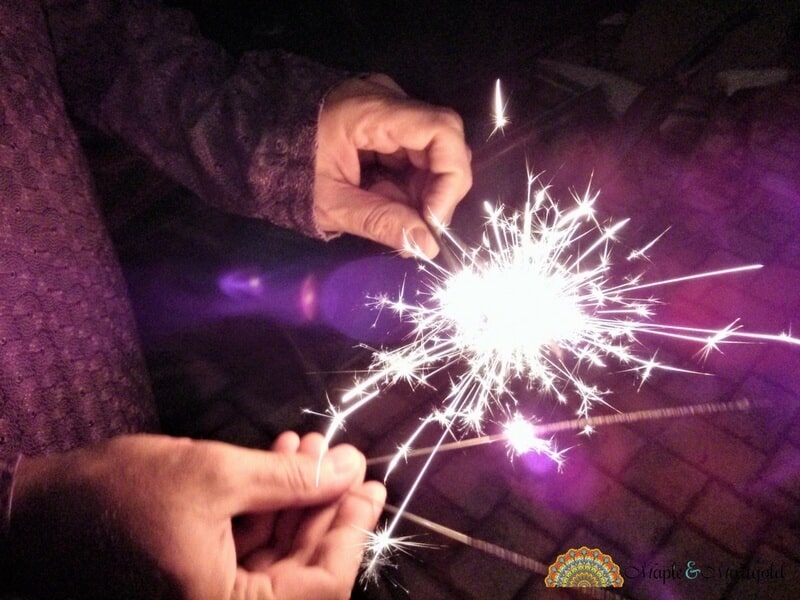 Ritual of lighting the diyas

There was a whole ritual of lighting the diyas, that started days before Diwali. I remember accompanying my grandfather to the market to buy the clay diyas the week before. There is a whole cottage industry that sprouts up in the weeks before festivals like Durga Puja and Diwali, centered around making and selling painted clay idols and diyas. Everywhere in the market place, there are stalls and carts filled with hundreds of diyas, piled up high like fresh produce. I imagine the potters add new calluses to their hands, on account of the continuously spinning wheels. But I digress.

My grandfather would buy 50 to a 100 diyas after bargaining, and a set of painted Lakshmi and Ganesh idols. Lakshmi is the Goddess of wealth and prosperity, Ganesh is the God of good luck, remover of obstacles. Every prayer starts by first bowing to Lord Ganesha. No Diwali celebration can be accomplished without praying to Laskhmi and Ganesh.

We would immerse the diyas in a tub of water, immediately upon arrival at home, to cleanse them. This always struck me as amusing because they are made of dirt, so why are we removing the dirt? But there was another reason to soak them. Apparently they light better if soaked in water first. Regardless, what I remember is the smell of the clay in the water and the little bubbles of air escaping the tub. My sister and I would then arrange them in the sunlight to dry out the water. Once dry, my mom or grandmother would arrange them in neat stacks, ready to be lit.

Banish the night, invite the light

My grandmother had a specific plan to celebrate Diwali and the lighting of diyas. Light a couple of them on Dhanteras, two days before Diwali. She would usually buy something metal for the kitchen on this day – a spoon or a tea strainer. Light a few more at the entrance and in the kitchen on Choti Diwali, the day before Diwali. Light them all, around the house, in every room on Diwali night. Banish the night, invite the light. All the diyas were filled

Two special diyas were bigger in size than the rest – one had ghee and the other mustard oil. My grandmother placed these in front of the temple, and tended to them periodically in order to keep them alight, throughout the night. No one would blow the flame out on Diwali night. I used to create imaginary dialogues about how the other diyas might feel jealous of the two prestigious diyas because they got extra ghee and oil.

My grandmother would say the cotton wick signifies the human soul and the ghee or oil represent the evils of human life – desire, anger, greed, ego and attachment. At Diwali, in lighting the diyas we were performing the symbolic ritual of eliminating our sins – an annual, metaphoric purification by fire. Learning to let go of the vices in our lives. I have viewed these rituals surrounding the diyas with wonder, awe, rebellion, annoyance and apathy at various stages in my life. As I reminisce about them in nostalgia, I suppose I have come full circle.

When I moved to different parts of the world, it became difficult to keep these customs going. In Dubai, we would get earthenware diyas, but they were not the same unadorned, unpainted ones. Plus we were in a small apartment, so 50 diyas were perhaps a fire hazard. In Minneapolis, we replaced the diyas with Ikea tealights in glass holders. If Diwali was in October, you might see some pumpkins alongside the diyas. If it was in November, there was a very good chance that there would be snow outside. So we lit the diyas inside the house. In Geneva, I try to recreate the ambiance and festive atmosphere of celebrating Diwali back home. Except that I am confused about what “back home” means. 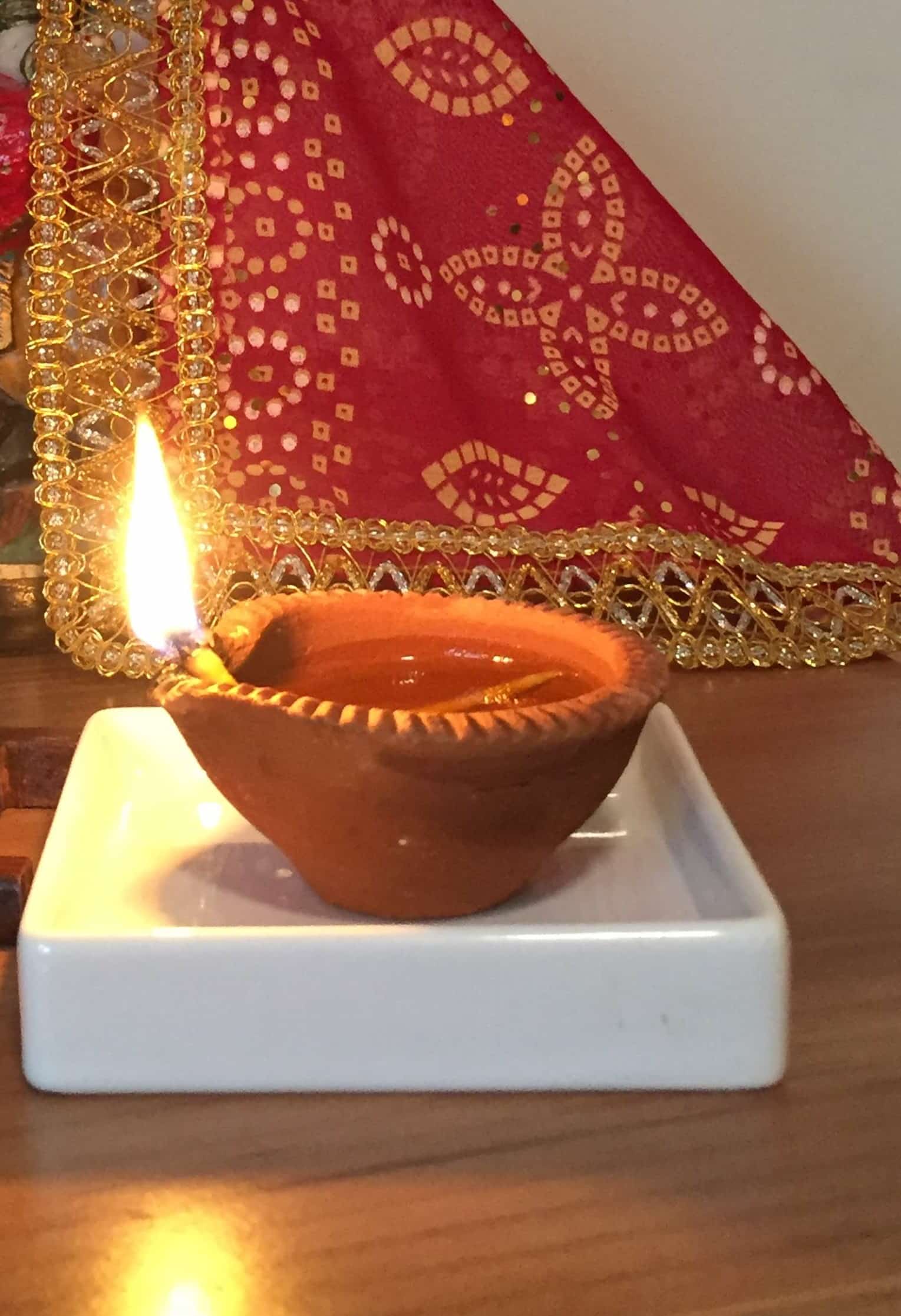 …and continuing some old ones.

My grandmother kept lighting the diyas well into her old age. The numbers kept reducing as it got harder for her to do the whole soaking, drying, oil & ghee with hand-made wicks. My mom still lights them in India and keeps reminding me to light them over the phone. The teenager in me rebels every time, even now.

It doesn’t help that I am a purist. If I start something, I need to do it well. So I negotiate with myself. What rituals and customs can I commit to, that I can keep doing year after year? Which traditions would I like to see my girls to carry forward? What memories will they remember with a sense of joy and wonder, not obligation? Celebrating Diwali, lighting of diyas to represent the symbolic triumph of good over evil seems like a good place to start. We light the diyas every year – the two extra-special, all-night ones. And of course the Ikea tealights in glass holders. Perhaps they will forge new ones too! 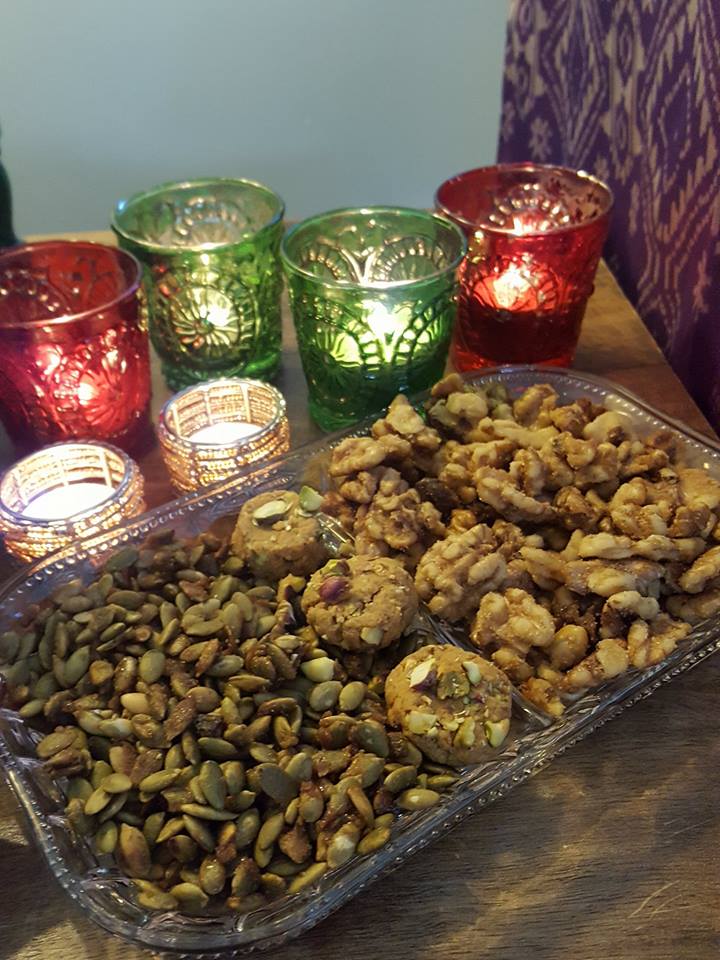